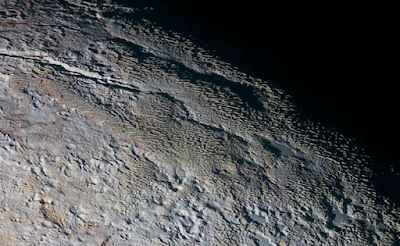 Our solar system frequently causes bewilderment for the current understanding of its age. Above all, planets and moons tend to be geologically active.

The latest images of Pluto are in keeping with this trend:

“So far, Pluto has turned out to be strikingly active for an icy world 5 billion kilometres from the Sun. Nitrogen glaciers swirl around the base of towering mountains, which are held up by the sheer rigidity of ice frozen at about −235 °C, 38 degrees above absolute zero.”