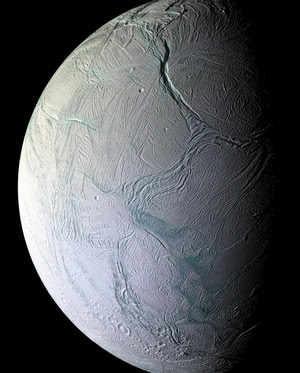 The solar system does not look as old (4.5 billion years) as it is assumed to be. Time and again, scientists are surprised to find signs of youth.

One such discovery was that of a subterranean global ocean on Enceladus, a moon that probably has geysers:

“Beneath an icy crust, Saturn's moon Enceladus … has an ocean that covers its entire globe. NASA's Cassini spacecraft measured wobbles in Enceladus's rotation over more than seven years. The data confirm that the crust is moving separately from the rocky core, meaning that there must be a widespread layer of liquid between them, says a team led by Peter Thomas of Cornell University in Ithaca, New York.”

This is yet another discovery that challenges the billions-of-years dogma.