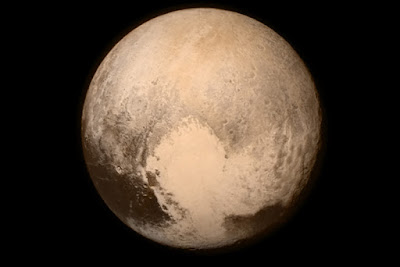 
How can a planet that is assumed to be 4.5 billion years old still be geologically active? This is the question confronting NASA scientists after the recent Pluto flypast by the New Horizons spacecraft:

“Close-up images of the edges of nearby fractured plains called Sputnik Planum reveal nitrogen glaciers that reach into a rugged, cratered terrain to the north. At Pluto's frigid temperatures — about −235 °C, 38 degrees above absolute zero — water ice is too brittle to flow. But nitrogen ice could, if it is roughly a kilometre thick and heated by radioactive decay leaking from Pluto's interior, says William McKinnon, a New Horizons team member and a planetary scientist at Washington University in St. Louis, Missouri.”

The obvious answer is that Pluto is much younger. And it’s not the only dwarf planet that looks younger than expected.