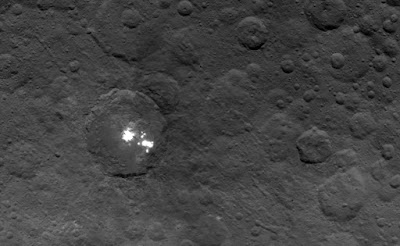 When it comes to dwarf planets, Ceres is rather big, with a diameter of 950 kilometres (590 miles).

It also has a big surprise. In 2014, researchers working with data from the Herschel Space Observatory reported seeing water vapour spraying off the planet.

Now, NASA’s Dawn spacecraft that is approaching Ceres has observed “a haze that appears occasionally in a crater above some of its mysterious white spots.” Ceres might even have an atmosphere of sorts.

Anyhow, the new data seem to provide some more puzzles for those believing in billions of years.

Pluto was a surprise, as it looked too young to be 4.5 billion years old. So did its moon Charon.

With each passing day, Genesis is becoming increasingly relevant.