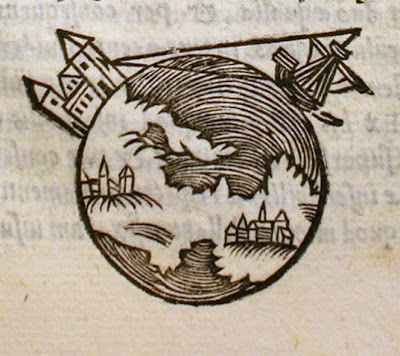 Not so flat. Image included in the 1550 edition of De sphaera mundi (On the Sphere of the World). The book was originally published in 1230. Image courtesy of Wikipedia.


Recently, Turkish politicians have come up with interesting views about the history of science. First, President Recep Tayyip Erdogan claimed that Muslims discovered the Americas in the 12th century. Then Science, Industry and Technology Minister Fikri Işık revealed that Muslim scientists led by al-Khwarizmi discovered that the world was round – at a time when Europe had its darkest ages.

Or were they so dark after all?

Many people still believe that intellectual darkness prevailed in Europe during the Medieval Period (i.e., from roughly AD 500 to AD 1500). They assume that even the few scholars who existed at the time thought that the earth was flat.

However, it would be very difficult to find any reputable medieval source that could corroborate this view. Most scholars who wrote on the shape of the earth said that our planet was round.

One of the earliest writers to do so was the English monk known as Saint Bede or the Venerable Bede (673–735). In his book De temporum ratione (On the Reckoning of Time), he explicitly stated that the earth was round.

Iohannes de Sacrobosco (ca. 1195–1256) was a monk and an astronomer who wrote an entire book on the shape of the earth. Entitled De sphaera mundi (On the Sphere of the World), it was published in 1230. His argumentation sounds very modern:

“THE EARTH A SPHERE. -- That the earth, too, is round is shown thus. The signs and stars do not rise and set the same for all men everywhere but rise and set sooner for those in the east than for those in the west; and of this there is no other cause than the bulge of the earth. Moreover, celestial phenomena evidence that they rise sooner for Orientals than for westerners. For one and the same eclipse of the moon which appears to us in the first hour of the night appears to Orientals about the third hour of the night, which proves that they had night and sunset before we did, of which setting the bulge of the earth is the cause.”

Thomas Aquinas (1225–1274) was probably the greatest theologian of the Middle Ages. In his Summa Theologica, he described the earth as being round like a ball. He pointed out that it was not shaped like a shield.

In addition to books, we can also see evidence for a spherical earth in the symbols that the rulers of the Byzantine Empire and the Holy Roman Empire used. A coin minted during the reign of Emperor Theodeseus II (who ruled from AD 408 to AD 450) already shows the Globus Cruciger, which is Latin for “cross-bearing orb”. The cross symbolises the victory of Christ on the cross and the orb beneath it depicts the shape of the Earth.

A medieval painting shows Henry III, Holy Roman Emperor (1017–1056), being presented with this symbolic sphere. And a 13th century painting shows Emperor Fredrick I Barbarossa holding the Globus Cruciger in his hand.

It looks very round.

For many centuries, the Globus Cruciger was used as a symbol in the crown jewels of several European monarchies.

It thus seems that there is no historically sound basis for the belief that people in the Medieval Period thought that the earth was flat like a pancake.

But the Jews already knew that the earth was round in the 7th century B.C. The prophet Isaiah wrote: “He [God] sits enthroned above the circle of the earth, and its people are like grasshoppers” (Isaiah 40:22, NIV).