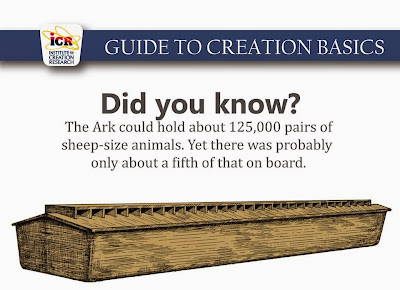 Plenty of room on board Noah's Ark. Image courtesy of the Institute for Creation Research.


Contrary to what many skeptics believe, Noah's Ark was no toy ship. There wasjackals probably room for roughly 125,000 animals the size of a sheep on board.

That's more than enough to preserve all the kinds of land animals that were alive in Noah's days.

One should not forget that the modern biological term species differs from the bibluical concept kind. Thus, there is the dog kind (wolves, dingoes, , dogs) and the cat kind (lions, tigers, leopards, cats etc.), for instance.

At least some dinosaurs never stopped growing. It is logical to assume that God probably brought younger specimens to Noah instead of the oldest and biggest individuals.
Lähettänyt bwanajoe klo 08:32