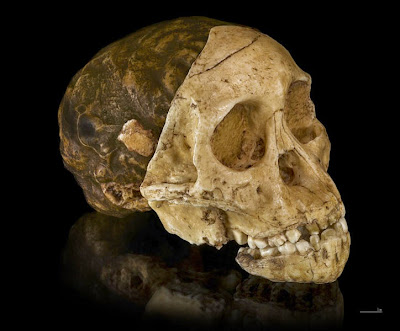 Discovered 90 years ago and made famous by Raymond Dart, the Taung Child became an icon of assumed human evolution. Also known by its scientific name Australopithecus africanus, for many decades it was the missing link – especially after the Piltdown Man disaster.

Taung Child was touted as “the first and best example of early hominin brain evolution”.

Now, however, research published in the journal Proceedings of the National Academy of Sciences (PNAS) throws a dark shadow on this view. According to Science Daily:

“By subjecting the skull of the famous Taung Child to the latest CT scan technology, researchers are now casting doubt on theories that Australopithecus africanus shows the same cranial adaptations found in modern human infants and toddlers.”

“Researchers are now casting doubt on theories that Australopithecus africanus shows the same cranial adaptations [i.e. unfused frontal bone] found in modern human infants and toddlers -- in effect disproving current support for the idea that this early hominin shows infant brain development in the prefrontal region similar to that of modern humans.”

In other words, it seems that A. africanus was just another extinct ape. This is no surprise. After all, ape men only belong to the Darwinian world and not to the real one.

Assumed human evolution has seen the rise and fall of several skulls once thought to be our ancestors, such as Ardipithecus ramidus (Ardi) and Toumai or Sahelanthropus tchadensis and Paranthropus boisei a.k.a. Nutcracker Man, for instance.

What is more, there seems to be a never-ending debate on the status of the Hobbit or Flores Man.