“Nutcracker Man” Lived In a Tree 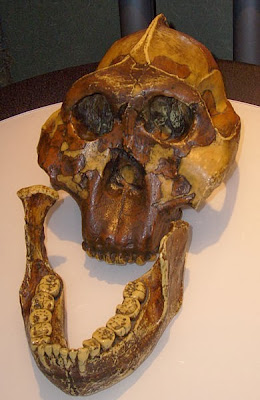 I once read the true story of a man who lived in a tree. However, a recent news update features an arboreal creature that some people would regard as a man, sort of, but was actually not a human being at all.

An assumed human ancestor discovered by Mary Leakey in northern Tanzania in 1959 was dubbed Nutcracker Man. Later research has suggested that this creature, also known as Paranthropus boisei, ate more grass than nuts, however, and preferred to live in a tree.

According to Science Daily, “Researchers found a partial skeleton -- including arm, hand, leg and foot fragments -- dated to 1.34 million years old and belonging to Paranthropus boisei at the Olduvai Gorge World Heritage fossil site in Tanzania.”

P. boisei was “characterized by ‘robust’ jaw and skull bones”. It “was a muscular creature with a gorilla-like upper body and more adaptive to its environment than previously thought, scientists have discovered.”

Charles Musiba, associate professor of anthropology at the University of Colorado Denver, who took part in the research, characterised P. boisei as a tree climber:

“The size of the arm bones suggests strong forearms and a powerful upper body.”

Dr. Musiba does not regard it as a human ancestor.

Many evolutionists believe that Lucy, a.k.a Australopithecus afarensis, assumed to be two million years older than P. boisei, already walked on two feet. There is no real evidence for this, though.

It was time for an old icon to fall. The problem is that evolutionists do not have many candidates who could take Nutcracker Man’s place, however. But, then, with every passing year, the entire Darwinian story is becoming less plausible.