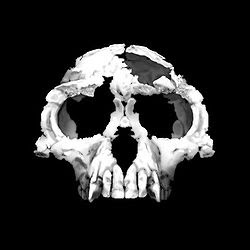 
In October 2009 the journal Science published several articles on a fossil discovered in Ethiopia. It was dubbed Ardi. According to its discoverers, Ardipithecus ramidus was a human ancestor that walked on two feet almost like us.

The find was severely criticized by other anthropologists. Alan Walker, a paleoanthropologist at Penn State, complained that “some portions of Ardi's skeleton were found crushed nearly to smithereens and needed extensive digital reconstruction.”

This naturally diminished Ardi’s credibility as a member of our human family.

Recently, Nature published a study that was very critical of Ardi’s status. Bernard Wood and Terry Harrison, who both are professors of anthropology, compared Ardi to other assumed hominids. They challenge the conclusions of the 2009 Science papers.

They conclude that Ardipithecus is an extinct hominid.

Wood and Harrison warn their colleagues of making too hasty interpretations of fossils. They remind us that scientists assumed that Ramapithecus, discovered in southern Asia in the 1960s and 1970s, was a human ancestor. However, they later found out that it was an ancestor of modern orangutans.

Oreopithecus bambolii, an ape found in Italy, also resembles human fossils to some extent, but studies have shown that it cannot be our ancestor.

According to Wood and Harrison, paleoanthropologists should carefully consider all possible options before they announce that a particular fossil is a human ancestor.

Although they do not rule out the possibility that Ardi might after all belong to the human family tree, they believe that the evidence shows that it is not a close relative of ours.

Creationists have always regarded Ardi as an extinct ape. While Nature’s criticism is a bit late, it is obviously better to set things straight now than to let readers think that scientists have at last found an apeman that walks to two feet.