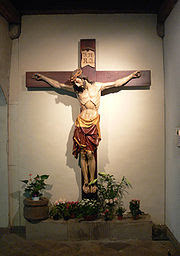 As Europe is debating the right to display crucifixes in public, Great Britain drops the word Christian from the name of a well-known Christian association. Image courtesy of Wikipedia.

Christianity is obviously not very trendy in Great Britain. Recently, a well-known Christian association changed its name. Known as the Young Women’s Christian Association (YWCA) since 1855, the association assumed the name Platform 51. (51 per cent of the population are women.)

The initiative for the name change came from YWCA. A spokeswoman for the association said that the name no longer reflected what its members represented since not all of them are Christians.

None of YWCA’s other 124 national organisations is planning to follow Great Britain’s example.

For some time, Britain has treated Christians harshly and trodden on their rights.

Recently, Owen and Eunice Johns, who are evangelical Christians, forfeited their right to be foster parents because they refused to give up their Bible-based views on sexual morality and said that homosexuality is a sin.