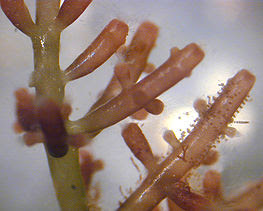 For researchers, the quantum computer is still mostly a dream. Marine algae, however, are surprisingly clever. They already apply quantum technology. ”Our result suggests that the energy of absorbed light resides in two places at once”, says professor Greg Scholes, the lead author of a new study on the photosynthesis of marine algae published in the journal Nature.

Computer memories are made up of bits that can only be in one state (either 0 or 1) at a time. Researchers have dreamt of a more sophisticated solution or a quantum computer in which the bits could be in more than one state simultaneously.

Now, research conducted by Greg Scholes, a chemistry professor at the University of Toronto, and colleagues shows that marine algae already make use of quantum technology.

The solutions seen in nature are often surprisingly clever. No wonder that the apostle Paul wrote in Romans 1:

” For since the creation of the world God's invisible qualities—his eternal power and divine nature—have been clearly seen, being understood from what has been made.”

The technology that marine algae use suggests extremely intelligent design.