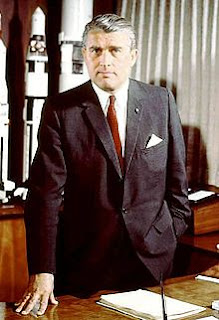 Wernher von Braun (1912 –1977), the father of the US Apollo space programme, believed that God created the entire universe. Image courtesy of NASA.

In December 1968 Apollo 8 astronauts Frank Borman, Jim Lovell and William Anders orbited the moon. They read the first ten verses of Genesis as a Christmas greeting to the inhabitants of ”the good earth”:

And God said, Let the waters under the heavens be gathered together unto one place, and let the dry land appear: and it was so. And God called the dry land Earth; and the gathering together of the waters called he Seas: and God saw that it was good.”

Dr. Wernher von Braun (1912 –1977), the father of the Apollo programme, was also a Bible-believing Christian. Since his time, however, NASA has sunk into a moral quagmire. Now, NASA employees cannot even suggest that at least some aspects of nature appear to be designed – if they want to keep their jobs.

Since 1997 David Coppedge has worked as an information technology specialist and system administrator in the Cassini Program at NASA’s Jet Propulsion Laboratory. He was demoted when a colleague complained that he had loaned two pro-ID DVD documentaries to his co-workers.

This week NASA announced that Mr. Coppedge would loose his job because they have to downsize the staff at the Jet Propulsion Laboratory.

NASA’s excuse is a lame one. Mr. Coppedge is one of the senior computer experts at the Jet Propulsion Laboratory. Usually, it is the junior members who have to go first and not the most competent ones.

It seems that for some NASA bosses intelligent design is like a red rag to a not-too-friendly bull.