40 Years Ago : A Christmas Message From a Lunar Orbit 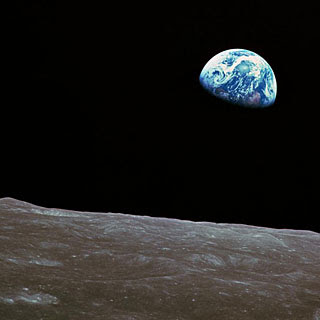 The Earth as seen from a lunar orbit. Image courtesy of NASA.

Forty years ago Apollo 8 astronauts sent their Christmas message to Earth in a direct television broadcast. From a lunar orbit, astronauts Frank Borman, Jim Lovell and William Anders read the first ten verses of the book of Genesis:

And God said, Let the waters under the heavens be gathered together unto one place, and let the dry land appear: and it was so. And God called the dry land Earth; and the gathering together of the waters called he Seas: and God saw that it was good.

On December 24, 1968 it was not yet politically incorrect to read Genesis aloud in public. We did not hear of Darwinists protesting vehemently, like they did when Answers in Genesis opened their Creation Museum in 2007.

To end their message, Commander Frank Borman wished a merry Christmas and said, ”and God bless all of you - all of you on the good Earth”.

It was probably no accident that the astronauts chose to read from Genesis. Doctor Wernher von Braun, the Father of the Apollo program, was a Christian who believed that God had created the universe with His Word.