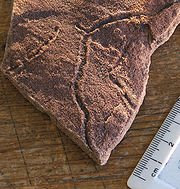 Marine biologists have found a grape-sized creature off the coast of the Bahamas. Mikhail Matz from the University of Texas at Austin and his colleagues discovered a group of single-celled creatures called Gromia sphaerica. A distant relative of the amoebas, it is believed to be the earliest living fossil.

The discovery, soon to be published in the journal Current Biology, was reported recently by BBC News and Discovery News. Both publications hailed it as an astounding find.

While G. sphaerica is a mere three centimeters or 1.2 inches in diameter, for a unicellular animal it is almost a giant. It left a 50-centimeter (20 inch) long trail on the seabed. Scientist did not believe that single-celled creatures could leave trails. They had supposed that all existing “trace fossils” or animal trails were made by multicellular animals.

Charles Darwin knew about the Cambrian Explosion, which weakened the credibility of his theory of evolution. However, he thought that the lack of fossil evidence for gradual evolutionary change was due to “the Imperfection of the Geological Record” as he put it in The Origin of Species (1859).

But the new discovery suggests Darwin was wrong. Matz explained that the find means that the Cambrian Explosion was real. “It must have been a diversification of life on a scale never before seen”, Discovery News quoted him as saying. He compared the find to a “burst out of a magic box”.

"There's a 1.8 billion-year-old fossil in the Stirling formation in Australia that looks just like one of their traces, and with a discoidal body impression similar to these guys," Matz went on to say. "We haven't proved anything, but we might be looking at the ultimate living macroscopic fossil."

Previously, the oldest trace fossil was believed to be 580 million years old. The new discovery pushes back their age a further 1.2 billion years on the evolutionary timescale.

This might cause us to question the credibility of the idea of millions of years of earth history. Moreover, all too often a single discovery has caused Darwinists to re-write vast sections of their supposed history.