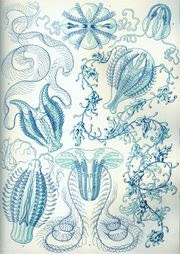 A recent study funded by the National Science Foundation used over 100 computers to analyse the evolutionary history of the Earth’s earliest animals. In the 19th century, Charles Darwin introduced the view that all living organisms form a tree of life from which the various species branch off. Although the tree currently looks more like a bush than a real tree, Darwin’s supporters have not completely discarded his basic idea.

Evolutionary biologists had previously speculated that simple creatures should have diverged from the trunk of the tree before the more complex ones. Accordingly, they believed that the sponge was the first animal to branch off.

However, the results of the research, published in the April 10 issue of the British science journal Nature, were a big surprise and disappointment for evolutionists. Casey Dunn, whose research team made the groundbreaking discovery, said according to physorg.com, “This was a complete shocker, so shocking that we initially thought something had gone very wrong."

The results were so shocking that the researchers had to check and re-check them several times before they were willing to believe what they had discovered.

The first animal to branch off was not the sponge but the comb jelly. This is significant since the comb jelly has tissues and a nervous system, which are complex systems thought to have evolved much later. A sponge, by contrast, is a more “primitive” creature, lacking both tissue and a nervous system. Dunn thus suggested that the first animal was more complex than previously believed.

In other words, the results were diametrically opposed to the expectations of scientists supporting the theory of evolution. Nonetheless, most of them are probably not prepared to discard their pet theory but will merely attempt to adjust the tree of life, even though part of it is now clearly upside down.