Is the James Ossuary Genuine? 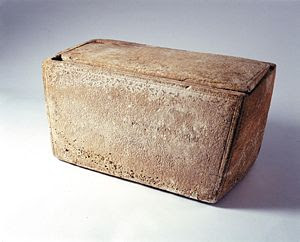 The James ossuary was on display at the Royal Ontario Museum from November 15, 2002 to January 5, 2003. Image: Wikipedia.

In November 2002 Biblical Archaeology Review published an article about an old limestone box dating from the first-century AD. It soon made headlines around the world. One side of the burial box or ossuary had the inscription “James, son of Joseph, brother of Jesus” written in Aramaic letters. This was a sensational find since it would probably mean that the ossuary once held the bones of Jesus’ earthly brother, who according to the Book of Acts was one of the early Christian marthyrs.

André Lemaire, an expert of Hebrew and Aramaic epigraphy at the Sorbonne in Paris, who wrote the article, said the inscription was authentic. Researchers at the Geological Survey of Israel likewise vouched for its authenticity.

However, when it became known that the ossuary was bought from Oded Golan, a private arts collector, the Israel Antiquities Authority (IAA) formed a committee to decide whether the inscription on the burial box was authentic or not. At issue was not the authenticity of the ossuary as such but only of the inscription and especially the word Jesus on it.

The committee failed to issue a final report but concluded that the inscription was a forgery. While Lemaire and some other prominent scholars continued to insist that the engraved letters on the ossuary were authentic and not later additions as some had claimed, the IAA began a long forgery trial against Oded Golan in 2004.

Hershel Shanks, editor of Biblical Archaeology Review, has from time to time published updates of the ossuary trial. In a fresh report, he stated that after hearing 75 witnesses, Judge Aharon Farkash, who is presiding over the case, suggested that the prosecution should drop the case for lack of evidence. Even the IAA’s main witness Yuval Goren, former chairman of Tel Aviv University’s Institute of Archaeology, admitted that after all the patina on the word Jesus was original.

While the case is not over yet, it seems very likely that the James ossuary is indeed authentic.

It is good to keep in mind that regardless of what skeptics claim the Bible, from Genesis to Revelation, is a reliable account of history.