Scientist Haven’t Got A Whiff of Dark Matter 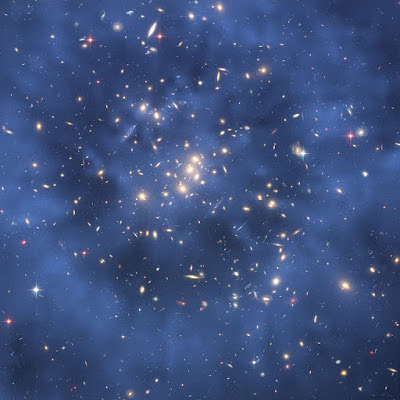 "Scientists have very good reason to dark matter exists— that there's some unseen stuff tugging on everything with its gravity but that's invisible to our telescopes.

But they don’t know what that dark matter is actually made of. Physicists have some guesses."

"One popular theory of dark matter states that the stuff is made up of particles called ‘weakly interacting massive particles,’ or ‘WIMPS.’ These WIMPs would be heavy particles not described in the Standard Model of physics, though they would likely be supersymmetric partners of Standard Model particles. "

They’ve just missed one. "A single detector in Italy sparkled more in the winter than the summer, hinting that a particular model of dark matter was correct."

However, the Italian detector was probably wrong. And dark energy is dead too.

The big bang has other problems as well, for instance missing antimatter, cosmic inflation, quantum fluctuation

In addition, the earliest galaxies formed too quickly.

“He [God] made the stars also,” Genesis tells us. That is by far the best explanation for the existence of the universe.