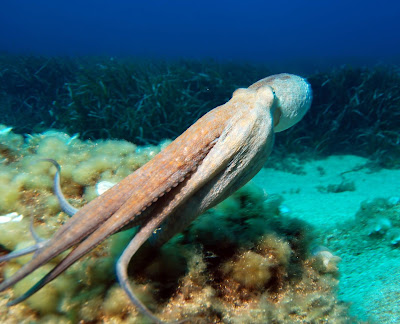 Evolution is full of just- so. stories. Recently, we heard that octopuses are aliens: they were not made on earth.

Now, there’s another picture in sight. The separating us and them can be breached by a drug:

“By studying the genome of a kind of octopus not known for its friendliness toward its peers, then testing its behavioral reaction to a popular mood-altering drug called MDMA or 'ecstasy,' scientists say they have found preliminary evidence of an evolutionary link between the social behaviors of the sea creature and humans, species separated by 500 million years on the evolutionary tree.”

They say that octopuses are “clever creatures, who can trick prey to come into their clutches. They are further notorious for escaping from their tank, eating other animals' food, eluding caretakers and sneaking around-”

Gül Dölen says that “certain brain chemicals, or neurotransmitters, that send signals between neurons required for these social behaviors are evolutionarily conserved."