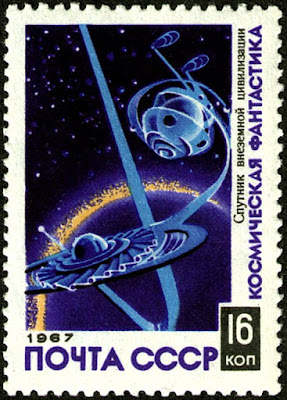 Alien spaceship? Image courtesy of the Ministry of Communications of the USSR. Design: Andrey Sokolov. Scanned by Dmitry Ivanov.

October 30, 1938 brought panic to the streets of New York. Orson Welles had adapted H. G. Wells’ science fiction novel The War of the Worlds for radio, and many listeners thought they were hearing a live broadcast on a Martian invasion.

At the time, people believed that Mars was inhabited by intelligent beings who had constructed a massive canal network that kept the red planet habitable.

Many people, including Stephen Hawking, are still fearful of big bad aliens.

Scientific American speculates on how we might react to the discovery of alien life. In an article awash with evolutionary assumptions, author Yasemin Saplakoglu quotes some true believers, including SETI’s Seth Shostak:

“Perhaps it might make sense for our brains—tuned by millions of years of evolution to be wary of predators—to freak out over immensely powerful alien beings arriving on our cosmic doorstep from parts unknown.”

“Gross thinks we would probably first try to understand it, a reaction that can be interpreted as yet another ancient, evolutionarily sculpted defense system aimed at gaining control of a novel situation.”

There seems to be a connection between believing in UFOs and in evolution. Darwinians detest the possibility that Earth could be a unique place, a privileged planet.

There is no evidence of any kind of alien life, despite the headlines suggesting otherwise. All reports have been false alarms. (See, for instance here, here and here.)