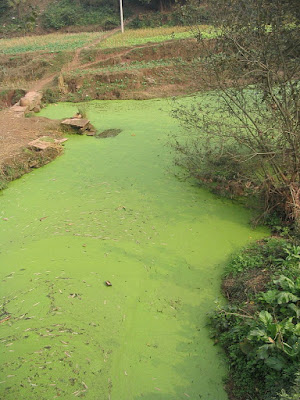 An article in the journal Science suggests algae killed the dinosaurs and other creatures in Madagascar, but there is a better explanation. Image courtesy of Felix Andrews, CC BY-SA 2.5.

How could we get a mixed assortment of animals into the same mass grave?

If we rule out the global flood of Noah’s day, we will have to resort to storytelling. This is exactly what Science recently did:

“Seventy million years ago, they all came to drink in the rapidly drying river: long-necked sauropods, fierce theropods, crocodiles, lizards, and raven-sized birds. They never left. The giant and the tiny were entombed together in the riverbed, forming what is now a spectacular series of mass graves in northwestern Madagascar. Last week, researchers proposed a culprit behind this ancient mystery: harmful algal blooms (HABs), in the very water that had lured the animals.”

The buried creatures display the classical dead dino pose, with the neck and head bent back, which suggests suffocation.

The Science article prefers to see algae as the cause thought there is no direct evidence of it.

A more plausible – and logical – explanation is the Genesis Flood that has left many other graveyards as well as other marks all over the world.