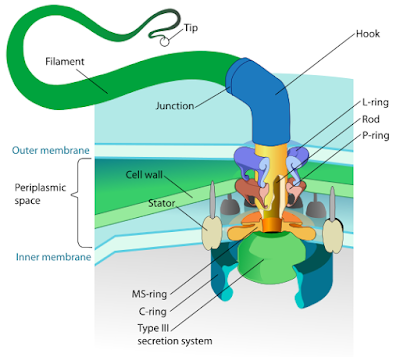 Bacteria are anything but simple. They are full of hi-tech devices, such as the bacterial flagellar motor.

A new paper published in the journal Physical Review Letters features a robot designed to move through sand or snow.

“By borrowing from biology, a new robot with a rotating coiled tail can move through loose powders at a good clip, making it useful for search and rescue missions or exploration,” New Scientist explains.

“Many bacteria use rotation to help them move through gooey fluids, powered by propeller-like tails. Similarly, seeds of some plants such as geraniums have a coiled appendage called an awn that helps push them deeper into the soil.

Enthused by these natural approaches, Baptiste Darbois Texier and his colleagues at the University of Santiago in Chile 3D-printed a plastic robot that can twist itself through granular substances. It is 12 centimetres long, with a hemispherical head and a helical tail. When moving, the head stays still as the tail rotates.”

Biomimicry or imitating intelligent designs seen in nature has become a flourishing area of research. The bacteria and seed -inspired robots might be used for “collecting environmental information in areas that are inaccessible to people – for example, in disaster zones, battlefields or space,” New Scientist quotes Wonjung Kim at Sogang University in Seoul, South Korea as saying.

Hi-tech features seen in the animal kingdom include fungi using a water cannon, the ladybird’s folding wings, the hatchetfish’s stealth technology, the chameleon’s tongue and the super sunscreen that some algae, bacteria and fish manufacture.

And many other things.