Live Science Features the Eiffel Tower but Fails to Disclose the Inspiration Behind Its Structure: Our Thighbone 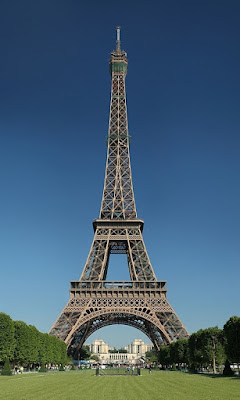 Biomimicry or copying design features seen in living organisms has become a lucrative research field, as the originals are almost always better than what human engineers could have come up with.

One of the oldest examples of biomimicry is the Eiffel Tower in Paris. French engineer Gustave Eiffel studied the work of anatomist Herman von Meyer.

Eiffel was especially interested in the strength of the human femur. Writing in Answers magazine, Dr, Don DeYoung explains:

“In the 1850s, Meyer had studied the human femur, or thighbone, which connects to the hip. This bone, the largest in our body, has an unusual off-center ball joint that fits into the hip socket. For strength, the bone’s curved head has many internal bone fibers, called trabeculae. These bone fibers crisscross each other in layers and are precisely aligned to withstand the varying forces of tension and compression. As a result of this ingenious design, the femur efficiently supports and transfers the off-center weight of the person. The femur’s ball joint may look awkward, but it functions superbly for a lifetime of movement unless bone disease interferes.”

He goes on to say that Eiffel made use of Swiss engineer Karl Cullman’s discovery, viz. that the “trabeculae fibers closely resembled the struts and braces used in buildings.”

Thus, the Eiffel Tower could “be built with a minimum amount of iron for maximum strength.”

In a longish article, Live Science omits the source of this design.

However, it could be more honest to give credit to whom credit is due.

It is no secret that inventors have copied most of their basic designs from creation.

We can see examples of amazing design and hi-tech solutions almost everywhere.

Let us not forget that God is the original Inventor. Humans merely copy his designs.