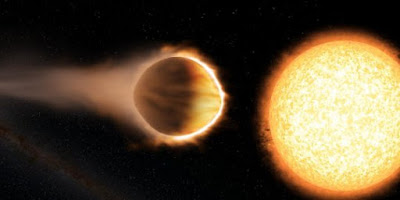 Weird is probably the adjective that best describes at least some exoplanets.

Some of them shouldn’t exist, if naturalistic theories were right.

There’s even a planet that kills naturalistic planet formation theories.

A new paper published in Nature features a hot Jupiter that beats most of the other weird worlds, WASP-121b, which orbits its sun roughly 900 light years away from us.

Science Daily gives us some details about this giant planet:

“WASP-121b has a greater mass and radius than Jupiter, making it much puffier.

The exoplanet orbits its host star every 1.3 days, and the two bodies are about as close as they can be to each other without the star's gravity ripping the planet apart. This close proximity also means that the top of the atmosphere is heated to a blazing hot 2,500 degrees Celsius -- the temperature at which iron exists in gas rather than solid form.”

WASP-121b is obviously not the place to search for little green men, regardless of whether they are bad (as Stephen Hawking assumes) or not.

The take away message from this discovery is that Earth seems to be a very privileged planet.