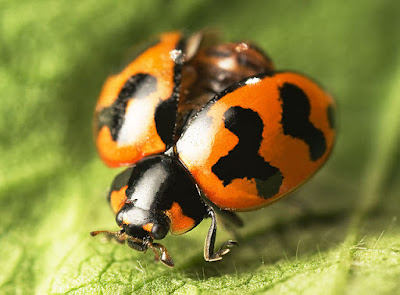 Ladybirds might be tiny, but they’re not stupid or clumsy. After landing, they can pack their wings into almost no space at all.

“They found that prominent veins along the edge of the wings allow creases to form and fold the wings away in a complex, origami-like shape. A bend in the wing can drift down a vein as it gets folded, but the wing is ready to spring back to a rigid form when the elytra [i.e. wing cases] open,” New Scientist explains.

The insect does this very fast.

The wing frames do not have any joints. The NS article also suggests a biomimicry dimension. This “folding mechanism could help us build solar array paddles that unfold themselves in space, foldable wings for small vehicles, or even lead to better umbrellas.”

Biomimicry or copying intelligent solutions seen in nature has in recent years become a popular and lucrative research field.

“Nature is a library from which industry can learn,” says David Hills, Director of Research and Technology (R&T) at Airbus.

From lotus leaves and mantis shrimps to the chameleon’s tongue and gecko’s feet, engineers are copying intelligent solutions they see in nature.

Amazing design implies an amazing Designer. The most logical explanation is that the Creator God designed them all.