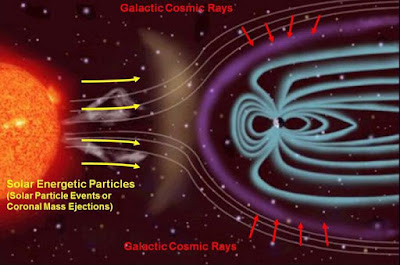 Cosmic radiation might not sound like a good source of preserving life. But that is exactly what a paper recently published in the Journal of the Royal Society Interface attempts to explain.

Researchers looked at an enigmatic microbe called Desulforudis audaxviator that lives 2.8 kilometres (1.7 miles) below the surface in a gold mine in South Africa.

It manages to live though there’s no oxygen, no carbon and no light.

The researchers believe that this rod-shaped bacterium gets its energy from radioactive uranium. An article in Science gives the details:

“It draws its energy from the radioactivity of uranium in the rock in the mine. The radiation from decaying uranium nuclei breaks apart sulfur and water molecules in the stone, producing molecular fragments such as sulfate and hydrogen peroxide that are excited with internal energy. The microbe then takes in these molecules, siphons off their energy, and spits them back out. Most of the energy produced from this process powers the bacterium’s reproduction and internal processes, but a portion of it also goes to repairing damage from the radiation.”

The discovery spurred researchers to speculate that there might be life elsewhere in the universe that likewise thrives in harsh environments, not getting their energy directly from photosynthesis or living on plants that do so, but directly from radioactive uranium or cosmic rays.

Usually, being exposed to radioactivity causes mutations that almost always are harmful. 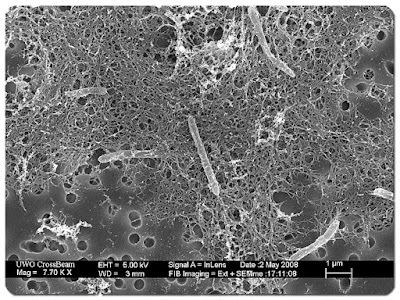 This weird bacterium has prompted some astrobiologists to set their hopes on finding life on Mars, Pluto, the Moon, Jupiter’s moon Europa, Saturn’s moon Enceladus and on countless star systems.

But there’s a huge problem they have not solved: life does not just happen, it has to be created.

While naturalistic searchers for the origin of life might have made spectacular headlines, the entire field is a mess.

Chemicals don’t just turn into life and the evolutionists’ best attempt, i.e. the RNA world theory, does not work.

Even the tiniest bacterium is by no means simple. It is full of tiny machines that are so intricate that their inventor should receive a Nobel Prize, as the best humans can do pales in comparison to what they do.

Nanomachines do not just fall from the sky.