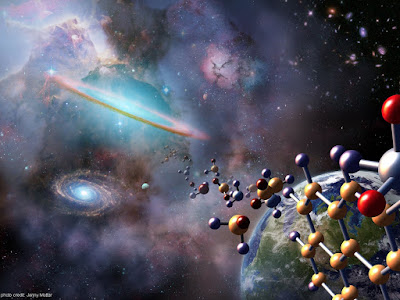 When an article has a title like Molecular ‘Midwives’ Helped Give Birth to RNA, we might perhaps not expect to read about empirical science, but then the origin of life business never was much about science.

“It is easy to speculate that some other molecule came before RNA, but determining the structure of molecules that might actually have come before RNA is a major challenge for chemists.”

This is how Nicholas Hud, head of the Georgia Institute of Technology’s Center for Chemical Evolution, introduces a paper he recently wrote with his colleagues.

And 'speculate' is no doubt the right word for the job. Naturalistic origin of life research has always been a more or less messy affair.

Hud and colleagues put their hope in proflavine, which according to Astrobiology Magazine is “a small planar molecule that binds between adjacent base pairs of a DNA, can dramatically increase the stability of DNA or RNA in the lab when single strands of the complex molecules are synthetically bound to an unnatural nucleic acid.”

Even then they are light years away from solving the elusive naturalistic conundrum, hence the need for mythological midwives.

Naturalistic theories of the origin and early evolution of life tend to share a common feature: they don’t work.

Honest researchers will admit that there is no solution in sight for a naturalistic origin of life.

From Darwin’s warm little pond to hydrothermal vents and panspermia, they have turned out to be utter failures.

Chemicals just don’t turn into life. DNA is far too complicated to have arisen in the beginning, so some have put their hope on RNA instead.

The problem is that even RNA is too complicated to have come about through Darwinian mechanisms, hence the need for a pre-RNA world, with comets or meteors bringing life’s building blocks to Earth.

But how did they get on board comets or meteors? Merely pushing pre-RNA molecules into outer space does not explain their origin.

Looks like it is time to remind ourselves of the words of Genesis: “In the beginning God created…”