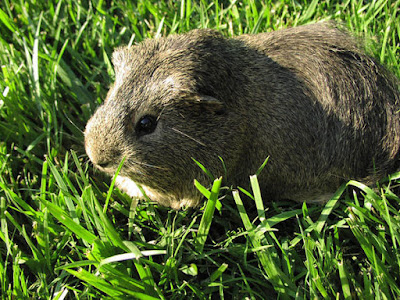 For decades, evolutionists attempted to explain virtually everything in the animal kingdom as a result of natural selection acting on random mutations.

Recently, however, both mutations and natural selection have received some heavy flak for failing to correspond to reality. First, natural selection is not that powerful. It merely eliminates undesired traits. Second, mutations are not that random, and they cause animals to loose genetic information, leading, for instance, to blindness.

New research published in the journal Molecular Ecology suggests that guinea pigs can adapt to raising temperatures by adjusting their DNA. According to an article published in New Scientist:

“Hot stuff. For the first time, wild mammals have been seen responding to higher temperatures by altering chemical structures on their DNA. These epigenetic changes may adjust the activity of specific genes, and some are passed on to offspring.”

Alexandra Weyrich of the Leibniz Institute for Zoo and Wildlife Research in Berlin, Germany, explains:

“Evolution by genetic mutation and natural selection can be slow. But epigenetic changes that affect how genes are expressed, such as attaching methyl molecules onto DNA, are much faster and more flexible. Experiments in a type of brine shrimp and the plant Arabidopsis thaliana have shown that such heat-induced epigenetic responses can even be inherited by the next generation.”

So, while she seems to buy into the Darwinian worldview, at least to some extent, the research she published with her colleagues is anything but neo-Darwinian.

They studied South American guinea pigs. Their results seemed to indicate that at least these animals could adapt to a warmer climate. The guinea pigs showed “significantly altered methylation in at least 10 genes that seem to be linked to regulating body temperature.”

Their DNA did not change. It is not known whether the changes are inheritable, but the research nonetheless suggests that whereas the key players in Darwinian evolution, i.e. natural selection and mutations, fail to work, epigenetics runs the show.

It sounds a lot like a designed feature that was programmed into the guinea pigs from the beginning, to help them cope in different kinds of environments.