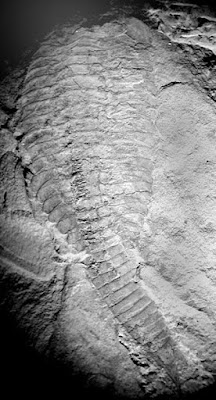 Brains were not supposed to fossilize. That was something every palaeontologist knew.

Even when Nature published a paper on a fossilized brain in 2012, many remained sceptical.

Now, however, Nicholas Strausfeld, one of the authors of the 2012 paper, has with his colleagues published a new study in the journal Current Biology.

An article in Phys.org says their discoveries “turn paleontology on its head,” as they provide evidence of fossilised arthropod brains assumed to be ”520 million years” old:

”The species, Fuxianhuia protensa is an extinct arthropod that roamed the seafloor about 520 million years ago. It would have looked something like a very simple shrimp. And each of the fossils - from the Chengjiang Shales, fossil-rich sites in Southwest China - revealed F. protensa's ancient brain looked a lot like a modern crustacean's, too.”

In case you’ve forgotten, stasis is the very opposite of evolution. If animals don’t change in “520 million years,” then how much time do they need?

The soft brains of Fuxianhuia protensa show clearly that Darwinian evolution is in a very deep crisis.