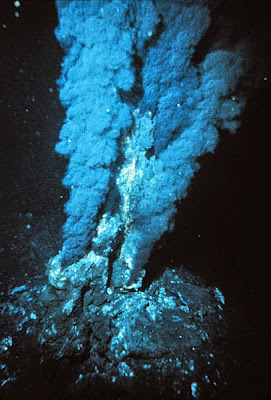 There’s no lack of expressions like "could have", "might have", "would be more likely to" and "offers a potential solution" in naturalistic origin of life scenarios. After myriads of failed explanations, the latest instalment invokes hydrothermal vents.
.
Tim Wogan writes in Science:

“On ancient Earth, the earliest life encountered a paradox. Chains of RNA—the ancestor of DNA—were floating around, haphazardly duplicating themselves. Scientists know that eventually, these RNA chains must have become longer and longer, setting the stage for the evolution of complex life forms like amoebas, worms, and eventually humans.”

However, this is pure storytelling. There is absolutely no evidence that RNA chains were “floating around” or that RNA is the ancestor of DNA. For the Darwinist, the origin of life remains a paradox.

Having taken off, the speculation reaches new heights (or depths):

“But under all current models, shorter RNA molecules, having less material to copy, would have reproduced faster, favoring the evolution of primitive organisms over complex ones. Now, new research offers a potential solution: Longer RNA chains could have hidden out in porous rocks near volcanic sites such as hydrothermal ocean vents, where unique temperature conditions might have helped complex organisms evolve.”

Imaginary RNA entities would not have had the desire or power to change into anything else. They would have hidden in porous rocks ad infinitum. Speculations featuring RNA stem from the belief that as RNA is not as complex as DNA, naturalistic processes might have produced it – given favourable condition and enough time.

There is an expression for this: wishful thinking.

Last year an article in The Scientist concluded that the RNA-world hypothesis is not viable. It does not produce life from non-life.