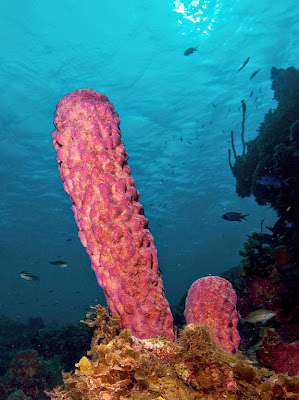 
Mark Twain wrote: “There is something fascinating about science. One gets such wholesale returns of conjecture out of such a trifling investment of fact.”

It might be good to keep this in mind when looking at a proposed solution for boosting oxygen levels in the seas and hence, according to Darwinian thinking, making the deep waters teem with life “hundreds of millions of years” ago and eventually making the Cambrian Explosion possible.

“Last year, came the suggestion that sponges transformed Earth's deep oceans 750 million years ago, turning them into an oxygen-rich haven for life. Now it seems tiny bacteria living inside the sponges also played a part in the drama.”

Fan Zhang of the University of Maryland in Baltimore thinks that sponges and bacteria might have “evolved a hyper-efficient system for extracting phosphorus”.

New Scientist explains the reasoning behind this speculation:

“Phosphorus is an essential but rare nutrient for ocean life. Like all marine organisms, sponges need it to survive but can't extract it from the water – but the bacteria can help them out. Meanwhile, bacteria need the sponges to pump vast amounts of seawater over them so they can extract more phosphorus.”

Without a massive infusion of genetic information the oceans would be absolutely dead. We can read the best and most logical explanation for complex life in the seas in Genesis 1:20: “Then God said, ‘Let the waters teem with swarms of living creatures’ “ (NASB).