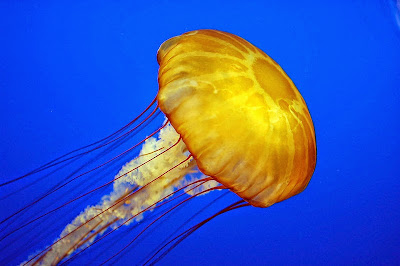 Contrary to what researchers used to believe, jellyfish are “not just bags of jelly drifting passively in the oceans”. They “are incredibly advanced in their orientation abilities,” says Graeme Hays of Deakin University in Australia.

He was commenting on a paper he and lead author Sabrina Fossette and colleagues recently published in the journal Current Biology. (“Current-Oriented Swimming by Jellyfish and Its Role in Bloom Maintenance”).

“It's possible that the animals detect current shear across their body surface, or they may indirectly assess the direction of drift using other cues, such as the Earth's magnetic field or infrasound,” Fossette and Hays say.

According to Phys.org they “tracked the movements of the jellyfish with GPS loggers and used GPS-tracked floats to record the current flows. They also directly observed the swimming direction of large numbers of jellyfish at the surface of the ocean.”

Jellyfish are not the only animals capable of intelligent navigation. Recent research has also reported on the prowess of turtles, robins and bees.

For evolutionists, jellyfish are a big dilemma. Recent research has suggested that jellyfish-like creatures might have remained relatively unchanged for “600 million years” according to the standard evolutionary timescale.

But for those of us who doubt Darwinian evolution, jellyfish or stingers as they’re called in Australia remind us of both creation and the Fall.