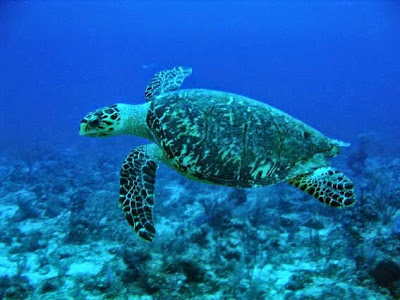 Turtles are amazingly clever at returning to the same stretch of beach on which they were born.

Robins and many other migrating songbirds return to the same place years after year. Salmon do it. Some butterflies do so also.

New research suggests that loggerhead turtles likewise return to their place of birth. A recent article in the journal Current Biology states:

“Ever since John James Audubon tied silver threads to the legs of young songbirds and observed their return the following year, evidence has accumulated that many animals return to their natal areas after migrating to distant locations. An extreme example exists in loggerhead sea turtles, which leave their natal beaches as hatchlings and traverse entire ocean basins before returning to nest, at regular intervals, on the same stretch of coastline where they hatched. How sea turtles accomplish natal homing has remained an enduring mystery of animal behavior.”

Research by Roger Brothers and Ken Lohman at the University of North Carolina suggest that loggerhead turtles (Carettacaretta) know how to use amazing technology. They say:

“Turtles derive long-distance navigational information from the Earth’s magnetic field by detecting the intensity and inclination angle (the angle at which field lines intersect Earth’s surface).”

What makes things difficult for Darwinian evolution is that different kinds of animals – birds, fish, butterflies and reptiles – are able to use a similar strategy, i.e., magnetic navigation. Some researchers believe we should add jellyfish to the list.

Evolutionists have to believe that this characteristic evolved at least four or five times.

But, then, convergent evolution is often Darwin-speak for “we don’t know how, but we assume evolution did it in some mysterious way.”

A more logical and plausible explanation is that turtles and birds and fish were made that way. Their Creator programmed them, giving them this incredible ability.