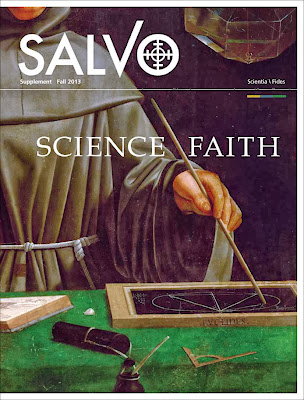 An article in Salvo magazine discusses the relationship of science and religion.

The purported conflict between science and religion is an atheistic myth, Professor Michael Keas writes in Salvo magazine. He says that while leading historians of science, for instance Ronald Numbers, have exposed this as “the greatest myth in the history of science and religion,” many advocates of atheism have continued to use this false argument.

Discussing their views, Prof. Keas says, “An anti-Christian agenda … often lurks below.” He points out that far from hampering science, Christianity actually promoted the growth of science:

“Science and biblical religion have been friends for a long time. Judeo-Christian theology has contributed in a friendly manner to such science-promoting ideas as discoverable natural history, experimental inquiry, universal natural laws, mathematical physics, and investigative confidence that is balanced with humility. Christian institutions, especially since the medieval university, have often provided a supportive environment for scientific inquiry.”

Keas shows that the expression Dark Ages is a misnomer. During the Medieval Period, the Church never hindered scientific progress. Most people never really believed in a flat earth, and the Galileo affair had more to do with the conflict between the Aristotelian view and Copernican cosmology than with theology. In the early 17th century, “the Aristotelian viewpoint, held by most church leaders, was the majority scientific view of the time.”

Thus, even if sceptics might not like Christianity, they should not argue against it by using false arguments.

Keas, Michael. 2013. In the Beginning: Episodes in the Origin & Development of Science. Salvo 26 Science & Faith Supplement.