Surtsey: Millions of Years of Erosion and Geological Features in a Few Decades 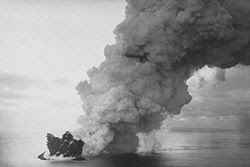 In 1963, Surtsey began rising from the ocean. Image courtesy of NOAA.


Many people associate erosion and major geological features with millions of years. However, geology often actually speaks against deep time.

In recent history, the eruption of Mt. Saint Helens in 1980 produced millions of years worth of rock layers. The island of Surtsey, which rose from the ocean in 1963, likewise gave rise to features that many would assume are very old.

They are not. This video clip produced by CMI shows why they aren’t: