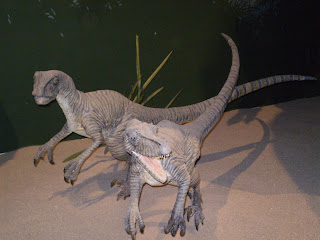 Researchers announced the discovery of C-14 in dinosaur bone.


Researchers have found radiocarbon (C-14) in dinosaur bone. For those who accept the conventional dates in the tens of millions of years, this might seem very disturbing. After all, C-14 has a half-life of 5, 730 years. Thus, after roughly 100, 000 years there should be no C-14 left.

Dr. Thomas Seiler, a German physicist, and other researchers presented their findings at the 2012 Western Pacific Geophysics Meeting in Singapore (August 13-17), arranged jointly by the American Geophysical Union (AGU) and the Asia Oceania Geosciences Society (AOGS). Their research was based on their “dating of multiple samples of bone from 8 dinosaurs from Texas, Alaska, Colorado, and Montana.”

The researchers took every precaution to rule out contamination and came to the conclusion that the dinosaurs could not have been older than 22,000 to 39,000 years, based on the current C-14/C-12 ratio, which ignores the impact of Noah’s Flood. The Flood buried enormous amounts of carbon, thus resulting in an entirely different C-14/C-12 ratio.

The arrangers of the AOGS-AGU conference were not pleased with the results. They deleted the abstract Dr. Seiler and colleagues had produced. Science is not supposed to work like this, but many are reluctant to challenge the prevailing paradigm of millions of years.

Their solution is the censorship of disturbing data.

This was not the first time radiocarbon was discovered in dinosaur bone.