When a revolver became a fossil 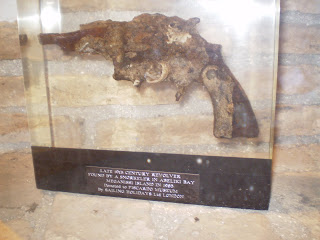 This fossil is obviously not millions of years old.

Many people think that fossils are millions of years old. But what if a fossilised animal – or thing- is only a few hundred years old?

Fiscardo is a small village on the Greek island of Kefalonia (Κεφαλονιά) in the Ionian Sea. Usually tourist guides remind the traveller that the island is as old as the dinosaurs that they assume lived at least 65 million years ago. Few have even heard of an interesting item on display in the museum of Fiscardo. It happens to be a partially fossilised revolver made in the 19th century.

At times, fossils can be more intriguing than we suppose. I have seen a photograph of a fossilised hat, for instance. Furthermore, a few years ago a yellow toy car was found buried inside a stone assumed to be extremely old. Yet the plastic car could not have been older than 200 years.

Skeptics might argue that the Kefalonian revolver is not a real fossil since it never was made up of organic matter. Some years ago, atheists protested the significance of a fossil hat popularised by Ken Ham. It indicated that petrification does not need millions of years.

PS. In 2002, Creation magazine had an interesting article on the stone teddy bears of Yorkshire, UK.
Lähettänyt bwanajoe klo 10:41