Marc Hauser and scientific misconduct: Is this an example of evolution-based morality? 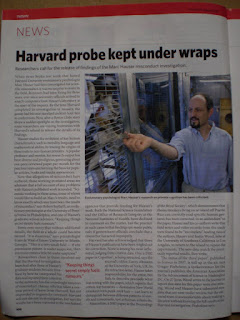 Marc Hauser, an evolutionary psychologists at Harvard University, who has been under investigation for alleged scientific misconduct, has been found guilty.

A well-known scientist, Hauser's research has been published in prestigious journals such as Science and Proceedings of the Royal Society.

Hauser has researched primate cognition. Like other evolutionary psychologists, he has attempted to interpret human psychology on the basis of the psychology of our assumed animal ancestors.

Other researchers have been unable to verify the reliability of Hauser’s monkey experiments. The tests suggested that monkeys have cognitive skills that they apparently do not have.

Hauser’s case is somewhat ironic since he believes that moral conduct can be explained by evolution without appealing to religion. In his book Moral Minds: How Nature Designed Our Universal Sense of Right and Wrong (HarperCollins, 2006) Hauser says that ”the Darwinian pulpit” is a better explanation of morals than the church and religion. He thinks that morals based on religion are dangerous.

A tree is known by its fruit. Right now, the fruit of evolution do not appear to be very succulent.