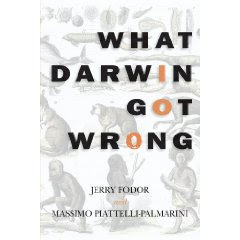 The very name of this book causes indigestion for some Darwin fans.

Having written a book entitled What Darwin Got Wrong, its authors might expect to get rather harsh feedback. After all, the inerrancy of the Father of Evolution has become Darwinian dogma. When New Scientist published its Darwin was Wrong cover story last year, many evolutionists were calling for a boycott of the magazine.

Fodor and Piattelli-Palmarini criticised the excessive role of natural selection in Darwinism.

Recently, in an interview for Salon.com, Fodor said that their book and articles had generated extremely harsh criticism in the blogosphere. It seems that people are not pleased when they are told that what they learnt in biology 101 is not true.

Fodor says, for instance, that the example often found in textbooks of how the giraffe got its long neck is mere storytelling.

This widespread tendency prompted professor Fodor to criticise the Darwinian propensity for making up just-so stories to explain phenomena such as how the spider got its web.

”One sees, even without God, how this Darwinian story could turn out to be radically wrong. You could see a massive failure of the evolutionary project, because wrong assumptions were made”, Fodor concludes. He says that he is still an atheist, though.

Richard Dawkins might not be too pleased with Fodor’s statements.