When Neanderthals Were Depicted As Apemen 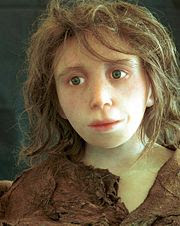 Recent discoveries have shown that Neanderthals were not ape-like. Reconstruction of a Neanderthal girl. Image courtesy of Christopher P.E. Zollikofer, Anthropological Institute, University of Zurich, via Wikipedia.

In the 19th century, anthropologists had not yet discovered any fossils of our assumed forefathers in Africa so they used Neanderthal men as their poster boys for Darwinism, depicting them as grunting, stooped cavemen. Evolution needed spectacular evidence and ape-men were well-suited for the task.

Chris Stringer, an anthropologist at the London Natural History Museum, acknowledges that Neanderthal men were not ape-men although they differed from us in some respects. For instance, they had larger brains than H. sapiens.

Dr. Stringer has not become a creationist but he nevertheless pointed out some misconceptions in a recent Scientific American podcast.

Neanderthal men were cleverer than we thought. (You can read more here , here and here.)

Neanderthals have made headlines recently. Svante Pääbo, a geneticist at the Max Planck Institute, and his research team are sequencing the Neanderthal genome and hope to publish some preliminary results in the near future.

Pääbo believes that H. sapiens and H. neanderthalis lived near each other for long ages in Europe and the Middle East and they probably came into contact with each other. However, he does not think that there was any genetic mixing between them and us.

According to the creation model, Neanderthal men were the descendants of Adam. They most probably lived after the global flood of Noah’s day so we would not be surprised to see Neanderthal traits in some of our fellow-travellers.