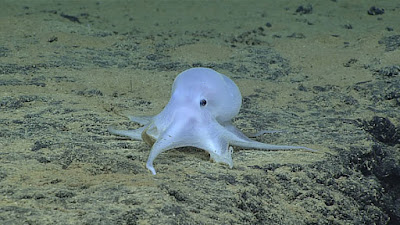 An octopus living over 4,000 metres (13,000 feet) deep below the surface in Hawaiian waters is new to science. Photographed by NOAA’s Deep Discoverer vessel, it might look a bit like a ghost, but it is definitely an octopus.

A report posted on the NOAA website states that although the strange animal resembles the common shallow-water octopus, it has unique traits:

“This animal was particularly unusual because it lacked the pigment cells, called chromatophores, typical of most cephalopods, and it did not seem very muscular. This resulted in a ghostlike appearance, leading to a comment on social media that it should be called Casper, like the friendly cartoon ghost. It is almost certainly an undescribed species and may not belong to any described genus.”

Invoking Darwinian explanations would be of little or no use, as this octopus shows that even weird animals conform to the after its kind principle mentioned in Genesis.

Hybrids, such as ligers, zonkeys, geeps, grolars, wholphins and leopons, likewise suggest that the Genesis principle is still valid.