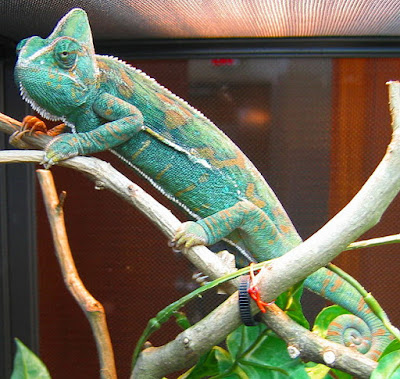 A new paper published in the Proceedings of the Royal Society A on the secrets of the chameleon’s tongue discloses hi-tech design that involves three integrated systems. The abstract uses design language:

“The ballistic projection of the chameleon tongue is an extreme example of quick energy release in the animal kingdom. It relies on a complicated physiological structure and an elaborate balance between tissue elasticity, collagen fibre anisotropy, active muscular contraction, stress release and geometry. A general biophysical model for the dynamics of the chameleon tongue based on large deformation elasticity is proposed. The model involves three distinct coupled subsystems: the energetics of the intralingual sheaths, the mechanics of the activating accelerator muscle and the dynamics of tongue extension. Together, these three systems elucidate the key physical principles of prey-catching among chameleonides.”

We would not associate expressions like 'complicated physiological structure' and 'elaborate balance' with random processes. In other words, the chameleon’s tongue does not look as though it was the product of the blind Darwinian watchmaker.

The BBC gives some more details:

“The chameleon's tongue is able to extend to twice the length of the body while unravelling telescopically.

Past research has shown if the tongue were a car, it could accelerate from 0 to 60 mph in one hundredth of a second.”

The article goes on to discuss the details of the tongue:

“Part of the secret of the chameleon's success, the researchers confirmed, is special stretchy tissue within the tongue.

At the core of the tongue is a bone, which is surrounded by 10-15 layers of very thin fibrous tissues, then a muscle.”

No wonder engineers are interested in copying the tongue’s mechanism in robotics.

Engineers are eager to copy the elegant design they see in the moth’s eye, flying snails and even flies, for instance.

The chameleon’s tongue also reminds us that we live in a fallen world where animals and plants need weapons and defensive strategies to survive.