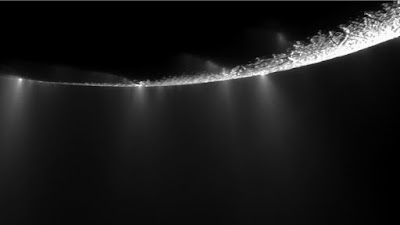 Many planets and moons in our solar system look far too young to be as old as the current secular consensus would assert, i.e. 4.5 billion years.

Researchers suspect that Saturn’s moon Enceladus has an underground ocean. Without it, the moon could hardly be as old as they believe it is.

A brief article in Science states:

“A watery layer beneath Enceladus’s crust has long been suspected to exist because of the constant eruption of geysers at its southern pole. But scientists have said that any such ocean should have frozen over the lifetime of the Saturn system.”

It’s a huge problem for the belief in billions of years. Researchers have attempted to solve the dilemma by suggesting that Enceladus may have a “rubble-filled pile of boulders and ice at its core, rather than a more conventional solid stone center.”

Some of the attempts used in bolstering up faith in an old solar system are beginning to sound like the epicycles that were used to explain the movements of the planets in the ancient Ptolemaic (geocentric) system.

Planets were assumed to move around in tiny circles as they orbited the Earth. This could explain some of the observations but not all and eventually the geocentric model was discarded.

It seems that faith in a billions-of-years-old solar system also needs epicycles, as the facts do not otherwise support the theory.

Many planets, moons and even asteroids look far too young, for instance Mercury, Venus, the dwarf planet Ceres, Saturn and its moons Titan and Mimas, Jupiter’s moons Io and Europa, Pluto and its moon Charon and even the asteroid 24 Themis.