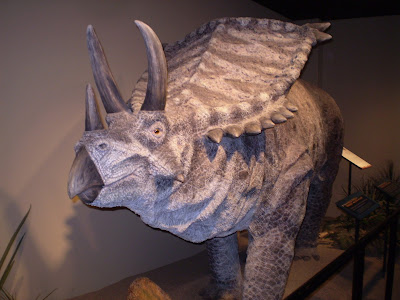 New research suggests that dinosaurs are much younger than previously assumed.

Scientists believing in deep time (i.e. millions of years) would not expect to find radiocarbon (C-14) in dinosaur bone. After all, they assume that the “terrible lizards” died out some 65 million years ago.

But what happens if researchers actually test whether dinosaur fossils contain C-14?

They will find it. The latest issue of the peer reviewed journal Creation Research Society Quarterly examines dinosaurs and soft tissue and reports on a study on radiocarbon in dino bone:

‘Carbonaceous materials’ probably refer to coal and diamonds that are known to contain radiocarbon.

Soft tissue has been found in many kinds of animals assumed to be millions of years old.

Brian Thomas and Vance Nelson went on to say:

“Unexpectedly, all 16 samples submitted for measurement contained C-14. We found measurable amounts of 14C in all 14 of our dinosaur and other fossils. Moreover, we found surprising consistency in these data, which range from approximately 17,850 to 49,470 radiocarbon years as indicated in Figure 1.”

This was not the first time radiocarbon was found in dinosaur bone but it was the most comprehensive study so far. (Read about past research here and here.) The measurements were made in laboratories that had no axe to grind, and the researchers ruled out contamination.

Thus, dinosaurs could not have lived millions of years ago. The pre-flood world was probably very different from ours, so the radiocarbon dates in the tens of thousands of years do not correspond to the actual time the dinosaurs died, but they are nevertheless much nearer to biblical dates than to secular ones based on uniformitariarism.

This research suggests that the model based on Genesis corresponds to scientific evidence while the one based on evolution does not.