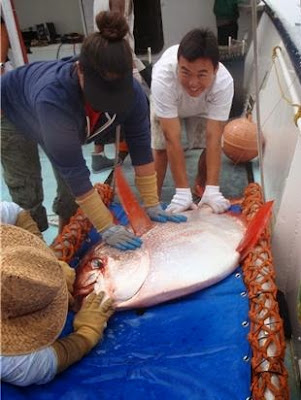 Fish were supposed to be cold-blooded, but researchers have discovered that there is at least one exception - the opah (Lampris guttatus), also known as moonfish. Science magazine states that it

“lives in deep, cold water, but it generates heat from its massive pectoral muscles. And it conserves that warmth thanks to body fat and the special structure of blood vessels in its gills.”

The opah manages to keep its body temperature 5 °C warmer than the water, thanks to an amazing design feature:

In contrast to other fish, “the opah has an elaborate network of tiny blood vessels, in which arteries lie next to veins in tightly packed arrays.”

As the article shows, this looks very much like a designed feature:

“This arrangement of paired arteries and veins is known as a rete mirabile, or ‘wonderful net,’ …The opah is the first fish discovered with a rete mirabile around its gills. The gills’ heat exchanger is wrapped in a centimeter-thick layer of fat, which is unusual in fish.“

When it comes to the animal kingdom, words like ‘wonderful’ and ‘amazing’ are not understatements. Time and again, the features we see in animals make us wonder how wonderfully they are made.

There’s no sign of the handiwork of the blind watchmaker.