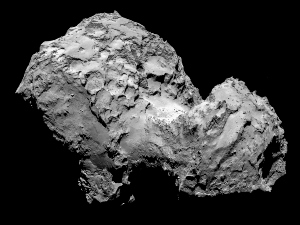 Researchers used to think that magnetic fields could tie bits and pieces of dust and rocks together, eventually forming planets.

However, new data sent by the European Space Agency’s Philae lander from comet 67P/Churyumov-Gerasimenko show that the theory does not work in practice.

According to an article in New Scientist, “the comet has almost no discernible magnetic field.”

It seems that the basic problem in secular astronomical theories is that they do not work.

From quantum fluctuations to cosmic inflation and too rapid galaxy formation to inadequate moon formation theories, there are insurmountable problems in the views.

The solar system and the universe look as if they are fine-tuned. The obvious solution is that it was designed that way and no view relying on entirely naturalistic means can ever explain its origin.

“In the beginning God created the heavens and the earth” is by far the most logical explanation for the genesis of the universe – including everything in our solar system.