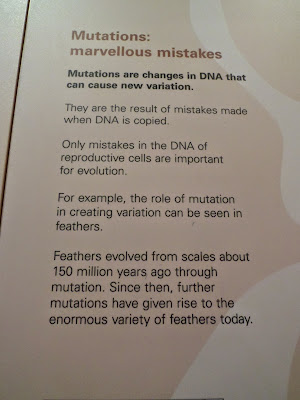 They’re probably not so marvellous.

They used to be touted as marvellous mistakes and the raw material for evolution but now mutations are increasingly loosing their ability to aid Darwinian evolution.

A recent paper published in the journal Mutation Research - Fundamental and Molecular Mechanisms of Mutagenesis suggests that cells have a defence mechanism that prevents genetic mutations from being expressed.

An Elsevier news release provides some details of the study:

“The method the authors used to make this discovery is termed Single-Cell Transcriptogenomics (SCTG). It allows DNA and RNA sequencing to be performed concurrently on the same single cells taken from a cell population treated with the powerful mutagen ethylnitrosourea. This method allowed the authors, for the first time, to prove the tendency of the transcriptional machinery in the cell to avoid transcribing DNA strands harboring a newly induced mutation. This is likely to be a novel cellular defense mechanism to prevent genetic mutations from being expressed.”

For the committed Darwinist, this does not sound like good news. If cells are fighting against mutations, how could all the hundreds and thousands of mutations that evolution sorely needs ever have occurred?

It might be best to see this error control as a kind of spell check system, only much more effective than the one in use in word processing programmes.

This amazing feature suggests that it is the brainchild of creative intelligence, and not of blind Darwinian mechanisms.

Going Beyond the Central Dogma of Molecular Biology: Rather than Being a One-Way Street, DNA-Directed RNA Transcription May Have Profound Adaptability. Elsevier news release 11 March 2015.