These Tusks Are Not for Killing: Sabre-Toothed Deer Is Still Found in Afghanistan 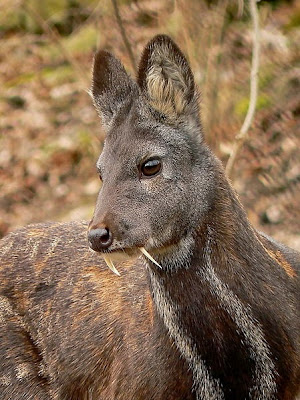 We usually associate sabre-toothed mammals with the Ice Age. However, a new study published in the journal Oryx suggests that the Kashmir musk deer Moschus cupreus still lives in Afghanistan. They lack antlers but the males grow tusks.

“This wildlife survey in the eastern forests of Afghanistan after decades of war indicates that the musk deer still persists there despite unregulated hunting, extensive deforestation, habitat degradation, and the absence of rule of law.”

Stephane Ostrowski and colleagues suggest that the Kashmir musk deer is endangered, however.

Tusks do not necessarily indicate ferocity. An ancient sabre-toothed animal found in Brazil preyed on plants.

Most people would associate sharp teeth with killing. However, not all animals with sharp teeth as a weapon. Pandas prey on bamboo and fruit bats drink nectar and eat tropical fruit.