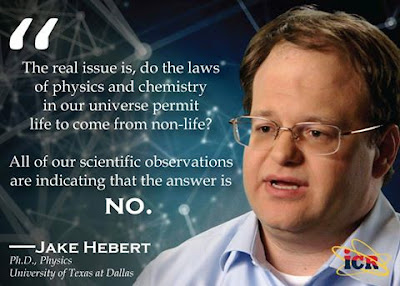 Naturalistic origin-of-life explanations are facing a dire crisis. This has not made an end to potential explanations, however.

In a characteristically Darwinian manner it presents a scenario of what might have happened:

“How do a bunch of dead chemicals come together to make something that’s alive? Well, a living cell is basically just a bag filled with water and a few more complex molecules.”

While the video also mentions enzymes, DNA and RNA, the overall picture is far too simplistic. Cells are anything but simple. They are full of astoundingly complex miniature machines - far too complex for human engineers to manufacture on such a tiny scale.

The video envisions the “bags”, i.e. cell membranes, moving about for aeons and gobbling up all kinds of molecules, mostly junk, but then by trial and error finding just the right ingredients for life.

Millions or even billions of years of random processes could never produce a single cell, however.

As ICR physicist Jake Hebert points out, the laws of physics and chemistry will not permit life to come from non-life.

Even some secular scientists will admit that what is needed is a miracle.

How life on Earth began