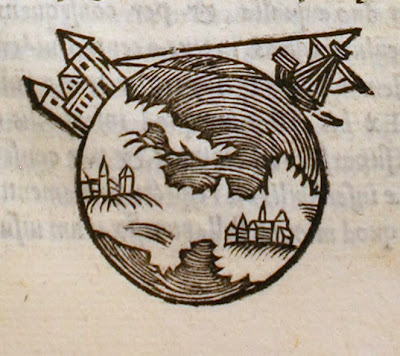 Not so flat. Image included in the 1550 edition of De sphaera mundi (On the Sphere of the World). The book was originally published in 1230. Image courtesy of Wikipedia.

The flat earth is a myth that has taken a long time to die. Sceptics often claim that the Bible and the Medieval Christian church believed that our planet was flat. However, they should probably do well to read De sphaera mundi, a book published in 1230, which shows that they are very wrong:

“THE EARTH A SPHERE. -- That the earth, too, is round is shown thus. The signs and stars do not rise and set the same for all men everywhere but rise and set sooner for those in the east than for those in the west; and of this there is no other cause than the bulge of the earth. Moreover, celestial phenomena evidence that they rise sooner for Orientals than for westerners. For one and the same eclipse of the moon which appears to us in the first hour of the night appears to Orientals about the third hour of the night, which proves that they had night and sunset before we did, of which setting the bulge of the earth is the cause.”

Of course, nothing in the Bible suggests that the earth is flat.

Iohannes de Sacrobosco. 1230. THE SPHERE OF SACROBOSCO. Translated by Lynn Thorndike, 1949. You can access it here.