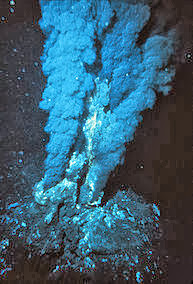 One of the discarded suggestions for a naturalistic origin of life. Image courtesy of Wikipedia.

For Darwinians, the origin and early development of life on Earth are difficult nuts to crack. However, one cannot blame them for not trying to figure out more or less – and usually less – plausible scenarios.

“Biological weathering of land, by which organisms eat up rocks and create sediments that wash into the oceans and pile up several metres thick. ‘Just think about lichens that cover bare rocks and provide continuous contact of water with the rock. Or bacteria that produce acids and dissolve rock,´ [Tilman] Spohn says.”

“Algae, bacteria and more complex life colonise the new land, erode it and dump masses of sediment into the ocean. The sediment – 40 per cent water by weight – is eventually pulled down more than 100 kilometres beneath the surface by early subducting tectonic plates, where piping hot temperatures release the trapped water. The hydrated mantle is viscous and more buoyant, so it rises and bursts through the surface in volcanic eruptions that add to the continental plate.”

This scenario is based on the assumption that Darwinian evolution is capable of producing and fostering life. While it is interesting, it is storytelling that relies on a computer simulation of what could have happened.